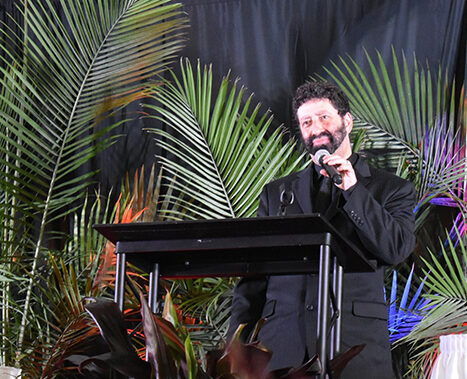 As the sun began to rise over the beautiful shores of Vero Beach Thursday morning, thousands of guests, filled with anticipation, streamed into Riverside Park to partake in the 15th Annual Prayer Breakfast.

John Bona, the founder of this event, opened the Prayer Meeting as he greeted all in the name of the Lord. Continuing, he thanked those who made this possible and explained the history and purpose of a Prayer Breakfast. Where did it originate and who performed the first one?

“Two thousand years ago,” he said, “There on the shore of Galilee, Peter was redeemed to Christ at the first breakfast, and breakfast groups were formed.” “We now gather as one, in the same manner, together and pray.”

After welcoming Pastors, guests and volunteers, Dr. Wayne Smith, director of Master’s Academy in Vero Beach led us in a prayer from 2 Chronicles 7:14. “If My people who are called by My name will humble themselves, and pray, and seek My face, and turn from their wicked ways; then I will hear from heaven, and forgive their sin, and heal their land.”

Carolyn Bona, wife and co-director for the banquet, greeted all with a prayer of thanksgiving to the Lord for all He has done. She then thanked the table hosts who every year so graciously make this event possible.

The phenomenal Guy Penrod and former lead singer of the Gaither Vocal Band ushered us into the presence of God. Numerous times many rose to their feet with hands raised in worship as he stepped down from the stage to sing directly to the hearts of all who had an ear to hear: Our God reigns.

Pastor Rob Shepitka from Light of the World Christian Church blessed the crowd with his powerful testimony and Jon Hamilton from Christian FM followed with a special prayer as the wind of the Spirit began to blow throughout the tent.

These are critical times we are in. He let us know that the ground is shifting beneath our feet. We are replaying a paradigm of ancient times of the bible. When, like Israel, they were founded on the laws of God but turned from that and began to worship false gods — because of that, judgment fell upon them.  ~Jonathan Cahn

John Bona then stepped forward to introduce the guest speaker, “Johnathan Cahn is a Messianic Rabbi and biblical scholar best known for his bestselling novel, The Harbinger”. In all humility, Jonathan greeted the two thousand guests before him with one word, “Shalom.”

Although you could still smell the aroma of freshly brewed coffee and breakfast rolls remaining on the table, God had something different for us to chew on.

“This message is not going to be politically correct, he said, “But it is a prophetic high and holy message,” Jonathan began, “These are critical times we are in. He let us know that the ground is shifting beneath our feet. We are replaying a paradigm of ancient times of the bible. When, like Israel, they were founded on the laws of God but turned from that and began to worship false gods — because of that, judgment fell upon them.”

From his book, The Harbinger, he shared about the nine harbingers that have already come to pass. Comparing facts between Old Testament days and the days we are living in is quite sobering.

“If we do not choose to return to God,” Jonathan said,” this nation will fall.” Boldly again he reminded us, we need to know and see the signs of the time—then he asked, what do we do now? Answering his own question, he quoted the same scripture from 2 Chronicles that all prayed in the opening prayer.

“He spoke armed with authority, truth, and confidence. The voice of God’s Holy Word boomed forth from his mouth,”  Prayer Breakfast Guest, Mary Jo

In closing, he sealed our time together as he asked all to stand. He then proclaimed a prophetic prayer over us. Afterwards, he sang a Hebraic song/ blessing over the crowd.

“We are not to run and fear the darkness,” He said. “Light is stronger than the darkness. God will anoint us for such a time as this. We have come here today because we believe the light is greater!”

Jonathan added that if we want to pray for revival, we must not just pray for it, but we must live it. Today is the day for each of us to become what God has called us to be in our life.

Although the Prayer Breakfast as we know it was over, the spirit of God and comradery between friends lingered on as the servers stripped the tables and guests faded on their way.

Mary Jo, one of the guests shared, “He spoke armed with authority, truth, and confidence. The voice of God’s Holy Word boomed forth from his mouth,”

In closing, I was blessed. I left with a snapshot and autograph, but Johnathan’s message resonates louder. God’s light is louder. Myself and others at the Prayer Breakfast will continue to bask in the words of the prophetic voice of our speaker who opened for us the deep mysteries and treasures of God. Shalom.

College Christians Want to Deepen Their Faith on Campus

College Christians Want to Deepen Their Faith on Campus

A Night to Shine