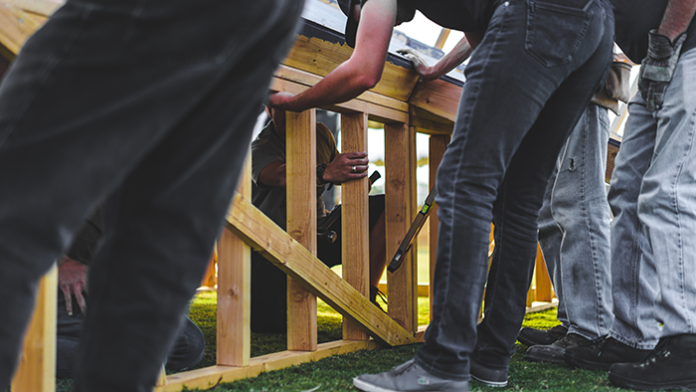 The past year has seen major growth and expansion for ADRN. Saturday’s speakers reflected on just how far the non-profit has come since founder, and Executive Director, Daniel Geraci, began the most unique disaster relief organization in the country.

In his own words, Daniel Geraci was just a regular guy doing a regular job in August of 2005. Then Hurricane Katrina happened and nothing would be regular in Daniel’s life again.

Katrina was responsible for more than 1800 deaths and 108 billion dollars worth of damage in Louisiana and Mississippi. The entire country felt the impact of the storm’s landfall and levy failures in New Orleans. Austin felt that impact keenly, welcoming more than 4,000 refugees from Louisiana. The city had never harbored more than 200 evacuees previously. To say that the infrastructure for such an ambitious undertaking was not in place is an understatement.

Today ADRN works with more than 200 local churches, training volunteers across 12 different sectors of the city.

The hosting of so many individuals, still in shock from personal and tragic loss, was a monumental task. Help was necessary from many different sectors of the city. Businesses, churches, non-profits charities and individuals across Austin joined together to help the victims of Katrina. It wasn’t perfect. There were many bumps along the road, but the job got done, thanks to the help of many sets of caring and generous hands.

One of those sets of hands belonged to Daniel Geraci. He and his wife opened their home to Katrina survivors who made their way to Austin. Watching the entire city, and the surrounding area, scrambling to provide services to more than twenty times the number of people it had ever hosted in the past, Daniel’s eyes were opened to the need for some sort of organization that could provide for those who survive a horrific natural disaster.

Out of this recognition would come the seeds that would one day grow into the Austin Disaster Relief Network or, as it’s more commonly known: ADRN.

Any attempt, however, to give Daniel credit for forming ADRN is quickly met by denial on his part. Daniel will tell you–very strongly, and immediately–that God handed him the complete instruction manual for the organization from the very outset. In one moment of clarity, Daniel saw the entire structure of ADRN, including dividing up the city into sectors, partnering with local churches and the transition point that ADRN would take over providing services where other traditional relief organizations left off.

Daniel realized early on that God was calling him to start this organization. He began to immediately speak with leaders in Austin about the vision of what ADRN could be, and do, for disaster victims not only in Austin, but throughout the state. The timing wasn’t right, however. God had provided him the vision, but not yet the means. The idea of a city-wide volunteer disaster relief network went back on the shelf for three years.

In late 2008, after Hurricane Ike had devastated Galveston, God suddenly placed the idea back on Daniel’s front burner. There was a sense of urgency about it this time. Now was the time, Daniel knew. Obediently, he immersed himself once more in making ADRN a reality.

Once he began the work God was calling him to, things happened quickly. Doors were opened and by March of 2009, just a little over three months after he began, Daniel left his regular job to manage ADRN full-time.

In 2017 alone, ADRN helped survivors of more than 83 Austin area disasters before Hurricane Harvey came along in late August. Harvey was devastating to so many cities, and ADRN workers were on site helping to clean up the aftermath and provide much needed clothing and supplies to the survivors. Hurricanes are devastating on a broad scale (and Harvey in particular), but it is important to note that ADRN works year round in Austin to provide relief to Central Texas residents. People who have suffered individual disasters like house fires, localized flooding, storm damages and wildfires.

Today ADRN works with more than 200 local churches, training volunteers across 12 different sectors of the city. These volunteers are being prepared to respond to a tragedy, to meet people at their point of greatest need. They are learning how to answer when called and go where they are needed the most. Whether in their own neighborhood or all the way down to the Gulf Coast. They may be responding to a call from ADRN, but ADRN is answering a call that God put out to Daniel Geraci more than twelve years ago.

If you speak with the leaders at ADRN, they will all tell you something similar–one church, one voice and one mission. ADRN wants disaster victims to see the church body come together, as one, to provide for victims of disaster. Imagine what we can do if we put aside any differences we have in doctrine to work as one with a common purpose. What could God accomplish through us if we did that?

During Harvey, what He accomplished was more than 6200 volunteers from Austin serving in communities devastated by flooding; 190 tractor trailers of food and supplies; 11,000 plus Welcome Kits put together for survivors; 10 homes completely rebuilt to date, with another 25-35 on schedule for this year.

THE FUTURE FOR ADRN

ADRN was not prepared for Harvey. Nobody was. God was ready, though. In that moment of darkness He used the Church in Austin to shine a light. To show how much He cares. There is still much to do, but ADRN is there for the duration. They expect to be working in places like Rockport, Port Arthur and Beaumont for the next 8-10 years.

There is hope, too, that ADRN can help develop similar disaster relief programs in other cities. Right now, there is no other organization like ADRN anywhere in the U.S.

One Church. One Voice. One Mission. See what God can do.

But For the Grace of God

Shepherd’s Gate: Living in a House of Hope