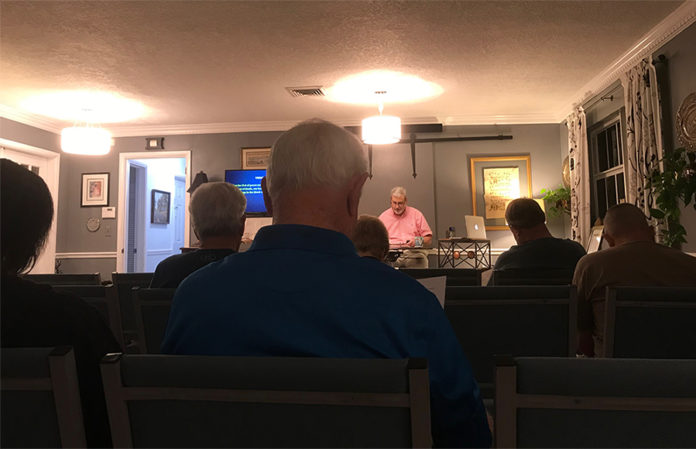 In April of 2004, Lewis Rudolph had a heart attack and died.

“I hung out in Heaven for a little bit. I had a conversation with God. It was wonderful there; warm, and safe, and I was not in pain,” Lewis said.

A visual of his experience could be best summed up in National Geographic’s classic image of a baby inside the womb. Lewis said, “His voice was very normal, like you and I are talking.” In a voice that was neither booming nor thunderous, God instructed him to go and preach the Gospel to the Gentiles.

“I said, ‘No. I don’t want to go,’ and He said, “No, you’re going.” I came back without [medical] intervention. No one had arrived to the [hospital] room to work on me.” When they tracked the length of his flatline, it was six seconds.

“It seemed timeless,” he said. “I came back feeling rested and wonderful, and I came back with a direction. I realized it was a direct order, and I had the choice of whether to obey Him or not.”

Although Lewis had already been reading the Bible for some time, this near death experience left him with a voracious hunger for a focused study of Scriptures.

Lewis grew up Jewish. In 1991, he moved from his home state of New York to Florida, where he met his wife, Jill, a Southern Baptist. They had mutual respect for each other’s beliefs.

Lewis read from the Torah, which is the first five books of the Old Testament. He had already begun attending church before his heart attack and ten years later, graduated from the Kaleo School of Biblical Leadership at Christ Fellowship Church in Palm Beach Gardens.

After enrolling in the Master of Arts in Religion program at Liberty University, Lewis felt that although the classes such as Old Testament and New Testament Survey provided a good overview of Scripture, Lewis wanted to focus his studies on the precise translation of the original text. He wanted both the micro, word by word meaning, to understand it in its original language, and he also wanted a macro view, to understand it in its content and context both within phrases and in relation to the rest of Scripture.

Lewis began pursuing the study of Hebrew letters, by enrolling remotely at a Yeshivah school in Chicago. After the tragic death of the school’s founders, the school closed.

Lewis then transferred to the Yeshiva Torah Institute, in Colorado, whose founder, Rabbi Oswald Garagorry, was raised in the Catholic church but later discovered his Jewish roots. Lewis studied at the Yeshiva school, both in person and remotely, traveling to Colorado three to four times a year, where he studied intensively with other students 40 hours a week.

“The joy of that school was that all we did was study Scripture,” Lewis said, and in 2017 Lewis received his doctoral degree in Hebrew Letters (DHL).

“Most people read and study Scripture based on their theology,” Lewis said. “What I try to do is help people understand our theology, or the study of God, through what Scripture says.”

Lewis believes that without this approach to Scripture interpretation, people have a tendency to interpret it to prove their own personal beliefs rather than to find the purest, most accurate interpretation. “This is where we get so many religions,” Lewis said.

“I look at the Bible like a million piece puzzle. When you take one piece out, that puzzle’s not complete, and that’s not the whole picture. Every word matters. If we really, really love God, if we want intimacy with Him, then we have to know exactly what His Word says to the best of our ability.”

As for the person who goes to church but doesn’t go home and read the Bible, Lewis says, “I feel sorry for him. There’s not a complete relationship. I’m not saying you aren’t Christian. Just, how can you have a meaningful relationship with someone you don’t spend any time with?”

Pastors from a variety of local churches have consulted Lewis over the years, with questions about everything from translations to the contextual ideas of what was happening in the New Testament at the time a given passage was written.

In essence, Lewis tries to start with a clean slate, by attempting to return to the purest interpretation of ancient Scripture, skeptical of any theology that might conflict with that, and seeking Truth in its purest form. He admits that sometimes in his quest for Truth, he finds himself in error, but when that happens, he quickly admits his mistake.

“The first thing I say is, “You need to check me, and if I’m wrong, which I have been, I’ll come back and say, ‘You know what, this is what I said, and it’s wrong.'” And then he proceeds on his mission to discover and teach what the Word of God says and apply it to our everyday lives.

Every Monday night for the past six years, people have been gathering in Lewis and Jill Rudolph’s front room in West Palm Beach, Florida for a Bible lesson that includes interactive discussion.

Lewis spends an average of twenty hours each week preparing the word by word, ongoing study of a given book of the Bible for his relatively small but highly focused audience, which often includes a senior pastor or two from local churches. They just completed the study of the book of Hebrews which they began two and half years ago.

Similar to what most churches would call a Life Group, Jill and Lewis warmly welcome each person into their home, referring to each of them, not as guests, but as family. Before and after each Bible study they set aside time for food and fellowship, providing an opportunity to get to know one another.

Lewis and his wife Jill, quietly live out their beliefs, honoring God as they believe Scripture teaches. They believe in honoring your parents and care for Lewis’s mother full time. Every Saturday, they honor the Sabbath, doing “no ordinary work,” as much as reasonably possible.

“If you consider turning the coffee maker on lighting a fire, then yes, I do work, but Jesus taught that it’s the spirit of the law, not the letter of the law that matters.”

Whenever possible, they care for others and live their faith as we are instructed in James 1:27, being not of this world.

Pure religion and undefiled before God and the Father is this, To visit the fatherless and widows in their affliction, and to keep himself unspotted from the world. James 1:27

A Chance to Share Your Truth with City Speaks

Halloween and the Church